The data is in, the reports are out, and it's clear that the rapid reduction of greenhouse gas (GHG) emissions is absolutely necessary to reach the goal of limiting warming to 1.5 degrees Celsius as part of the Paris Agreement. GHGs from vehicles are one of the key contributors to climate change. In fact, according to the City's latest inventory, in Toronto, transportation accounts for almost 40% of our greenhouse gas emissions. Cars and trucks are also a source of harmful traffic-related air pollution (TRAP) that can cause health problems. The concentrations of these pollutants are often higher in areas close to big and busy roads.

All of that probably sounds a bit scary and it may be easy to believe that you everyday actions do little to help the state of the environment. But collective action can actually play a significant part in Toronto's GHG emission equation. Not using your car regularly is sometimes not an option for many of us, but considering carpooling, or walking to the store for a quick errand can go a long way if we all do it together.

Now, what can YOU do about it?

There is a whole suite of actions individuals can take to mitigate their contribution to traffic related emissions. The report from the Environmental Commissioner of Ontario identifies three levels of individual actions that have varying degrees of potential impact.

1. Small steps: These actions include choosing a vehicle with reflective paint, driving vehicles with little excess weight, parking your vehicle in the shade during hot weather seasons, and not idling. Although small, the collective action taken by many individuals will compound the benefits of making these changes.
2. Medium steps: These include slightly more significant changes to daily life such as choosing high fuel & energy efficient vehicles to drive and travel in, inflating tires fully, and reducing the use of air conditioners in motor vehicles.
3. Large actions: These steps have the most impact on reducing emissions, but they also require more lifestyle changes. They include: carpooling to work instead of driving by yourself; taking other forms of transportation such as transit, cycling, or walking; and/or moving closer to work to reduce travel distance, time and emissions that can be produced during travel. 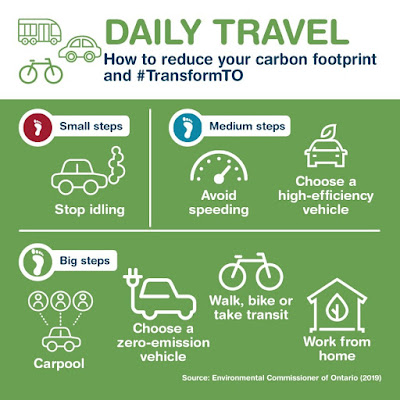 What is the City of Toronto doing?

Find out, after the jump...


The City of Toronto has implemented a wide variety of programs to assist in adapting more eco-friendly travel habits in order to decrease city-wide GHG emissions.  As a part of TransformTO – the City's Climate Action Strategy, Toronto is committed to reaching the following goals:

From a programs and initiatives standpoint, City of Toronto has:

- Begun the process of electrifying the TTC fleet of vehicles, starting with buses. The 1st all electric bus started operating on city roads in the beginning of June 2019, and will soon be accompanied by a fleet of 60 all electric buses anticipated to serve Toronto roads by the first quarter of 2020.
- Mandated a pilot initiative to provide on-street EV charging stations accessible to the public to promote adoption of electric vehicles.
- Supported programs such as Smart Commute, that work with employers, institutions, schools and property managers to provide daily commuters with alternative commuting solutions that draw people away from driving their cars alone to work.
- Expanded and continues to expands Toronto Bike Share (the green bike share stations planted across Toronto) to provide commuters with another form of travel if they do not have a bike or decided not to use their bike that day.
- Continues to promote active transportation by expanding cycling infrastructure throughout the city for travelers who wish to bike to their destinations or for recreational cyclists to enjoy the city on their bikes.
- Launched new transit-related initiatives such as the King Street Pilot to prioritize public transit vehicles like street cars to travel up and down streets quickly and efficiently between stops.