In line with our TransformTO objectives, the City of Toronto recently completed its first solar photovoltaic (PV) + energy storage project on Toronto Paramedic Services' EMS station 46 in the Woodbine and Danforth area.


More photos and details after the jump >>

Solar panels harvest energy from the sun, which is then used to either power the building's demand or charge the batteries. Once both the building's demand is being met and the battery is fully charged, the extra generation is fed back into the grid for an electricity credit. The system offsets 39% of the site's electricity costs and is expected to provide indefinite emergency back-up power.

In addition to generating clean electricity from the sun and reducing greenhouse gas emissions, the system is capable of providing back up power to the building. As the incidence of extreme weather events increases as a consequence of climate change, the added component of resiliency becomes crucial in ensuring the continuity of City services and infrastructure during emergency situations. The 'Resilient Toronto' initiative, in collaboration with the 100 Resilient Cities Network, will equip the City to withstand, respond to, and adapt more readily to climate-induced shocks and stresses. Notable examples of shocks and stresses include the ice storm in December of 2013 that left Torontonians without power for days. 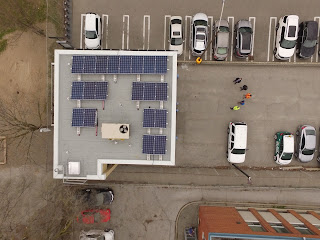 Based on this innovative demonstration project, the City plans to scale this solution to other facilities such as the Waterfront Neighbourhood Centre, a community centre and a TDSB school. This will enable the City to lead by example in moving away from the current regime which depends on expensive fossil fuel-powered generators for backup.

The City of Toronto is committed to reducing greenhouse gas emissions from its own operations. In 2016, the greenhouse gas emissions associated with City operations accounted for 10% of the overall emissions across Toronto. Through TransformTO, the city's climate action plan, the City has committed to leading by example on actions to reduce emissions associated with its buildings, vehicles, and waste. Find out more at www.livegreentoronto.ca.